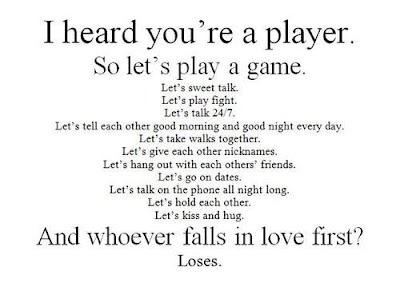 Now how funny would this be ladies if we were to operate with this mentality? What if we changed the game up and played the same game that these players are playing? I mean would we be held accountable if we were to break their hearts before they broke ours? Now I know a lot of you reading this have a conscious and are not able to live by being deceitful and i totally understand but sometimes you have to wonder how a player is able to play these games and make a woman fall in love just to break their heart.  Now let's say a female decided enough is enough, she's tired of the tricks and she's now ready to play chess. Is she in the wrong to do so? Or are these players not in the wrong for pushing a female to want to play the game because she is tired of being played? We live in a world where it is now acceptable for a man to play a females heart but if a female was to turn around and do the same, she is looked down on. There is a double standard. This double standard is not fair nor is it right.  These Players have to do better, they have to start treating females the same way they would wish for their daughters to be treated. Karma is a real problem and when these players grow up and have female daughters they will see the same pain they caused females being caused to their daughters and that is when they start feeling regret.

Now Ladies, If You Wanna Learn The Tricks of A Player ... Click The Link Below To Purchase The Ebook ..