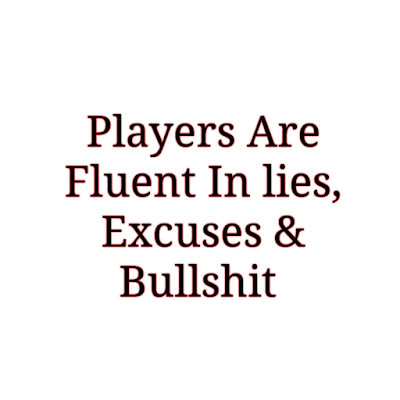 Now this is a straight up fact. If you're looking to identify a player, here it is. Watch out for the lies, the excuses and the BS! Now let's be real, some players are actually good at the lying and the excuses which is why it is quite difficult to spot when they are doing so.  Sometimes I actually wonder if there is a school where these players are taught because it's starting to look like a profession. But trust me when you catch your other half telling one too many lies and giving one too many excuses, you've got to let them go because they won't ever stop as it is a part of them.  Now Players need to lie and give excuses in order for them not to get caught in their deceit, which is why they are so fluent.

Now the most common question  that people seem to ask is why do men lie? Let's be honest, there are a vary of reasons as to why men lie to which my ebook goes into detail with. But the main reasons why men lie is either to hide something, to protect themselves or others, because they want to or because they are cheating. Now some of the reasons are just straight up selfish especially when they are lying to protect themselves or just simply because they want to but we have to have some sort of understanding for when they lie to protect others. Now i'm not saying its a valid excuse but i do understand that some men feel the pressure to have to lie in order to make their other half happy. Ladies this is where i put the blame on us because it's us that puts this pressure on them because when they want to be honest we already start with the problems before they even finish. So how can we fully blame them for lying to make us happy.

Now The Ebook shows a vary of reasons as to why players, so make sure you get the ebook in order to find out why.