If Anyone Can Have It, I Don't Want It 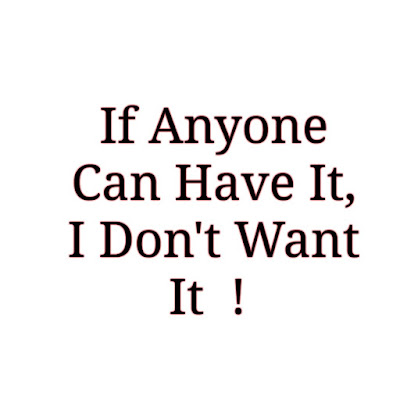 This is exactly how it should be. If the person you want to be with is accessible to just about everybody or anybody then that should not be a person you should want to be with. Honestly, who wants to be with someone who nearly everybody has been with or claimed ? That ish isn't even attractive. Imagine being in public with the person and continuously bumping into everyone they've been with because they're just that easy. I understand that it's not possible to be with someone who nobody else has been with, especially not in this world that we live in but trust me when I say the less the amount the better.  I once dated a guy who's track record wasn't that cute and let me just say that ish was soo embarrassing. Almost everywhere I went, there was someone that had either known him, known of him, had been with him or had known someone that had. Don't forget that, a cheap shop has a lot of customers whilst an expensive shop has less customers but more value, that's exactly the way you should look at it with your partner or the person you want to be with. Go for the person who is not accessible to just anyone and holds more value for themselves, thats the sort of person you can be in public with proudly.