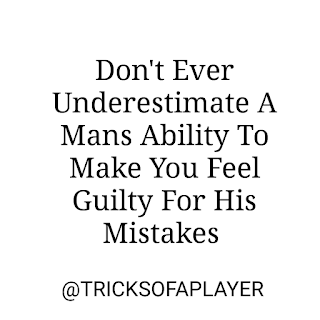 Ladies, take note ! Don't ever, I mean ever underestimate a mans ability to make you feel guilty for his mistakes ! I swear I have seen situations where a man has been caught cheating and the first thing they did was blame their woman. lol. It's comical but its real !

I can't even lie, i have definitely been in that situation and I was dumb enough to believe that it actually was my fault. So I started to look for faults in myself to actually make myself believe that the reason he was cheating was because of me. I know i am not the only female who has been in this situation, in fact i know plenty of females who have been here.

Now I am not saying that all females are completely blameless, what I am saying is that if a man cheats on you after you've given him your all, that's on HIM and not you !

It seems like some guys have this kind of power to make a girl feel like she is the reason for all the wrongs he is doing. I'm telling you now, it's just psychology and it's just an easier way for him not to feel as guilty as he should be feeling.

Ladies, if he messes up, hold him accountable and make sure you do not blame yourself for his mistakes,unless you actually are to blame, which I highly doubt !