Don't expect her to play her part, when you have other females auditioning for her role 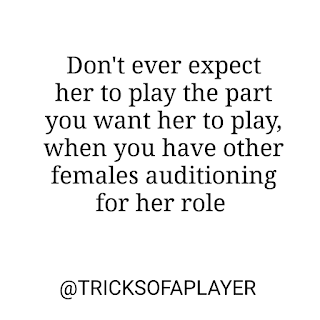 Say it louder for those in the back that don't seem to hear this ! It's just damn right disrespectful to ever expect a female to play the part you want her to play when you have other females auditioning for that exact role ! If you want a female to play a part in your life, you've got to cancel all other casting, this isn't a movie !

The worst thing to this is that some of you guys don't even let the girl know that other females are auditioning, us females have to find out the hard way. It's either we find out by some random ass female entering our dms or by being attacked by some female we have no idea even exists! It's got to stop guys, you've got to put more respect on our names !

It's about time that some guys stop having their cake and eating it too. Some guys need to learn the art of contentment. Find that one girl that can play all the roles you need and leave it like that. If she can't play all the parts, then teach her, don't go booking auditions so you can have more than one person playing the parts, it's unfair.

And Ladies, stop settling for guys who you know have more than one woman auditioning for roles in their lives, it's not worth it. You've got to really know your worth and know you're better than that and you're worth way more than that and if a guy cannot see that then he's not for you ! Point, blank, simple !