Your looks and a baby isn't going to make him stay ! 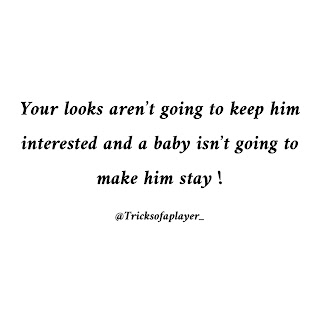 This is a hard pill to swallow but it's facts ! Don't ever be so delusional to believe that you can keep a man because of your good looks or because you're having his baby.  A man will stay if he wants to stay, nothing can keep him unless he wants to be kept.
Now lets start with the looks aspect... Listen darling, you can be the most beautiful person in this world and a man will still cheat or leave you. To be honest, Men do get into relationships with females because of how they look but the looks don't make them stay. You can be pretty but you need to have traits that the man loves in order to make him want to be with you or make you his wife. A man needs to love you for you beyond the looks and see beyond a pretty face. Your looks just isn't enough. That's the reason you see soo many situations where a man would leave his pretty girlfriend/wife for somebody who isn't as pretty. In the dating stage you need to ask him about what he wants in a girlfriend and if you have those traits that's perfect but if you know you don't, it's best you disappear and find someone who loves you for you.
Now onto the baby aspect... I know too many females who thought having a baby would keep their men with them but the only thing it did was make the man run further away. We need stop forcing babies on these men because we want them to stay especially if they aren't ready for children. Enjoy your life with him, go on holidays, dates or whatever makes you both happy before you allow children to enter the situation. If you have a baby with a man who isn't ready for a baby with you, you're going to be left as a single mum and that's the reality of the situation. Study your man and you will know if he's ready for a child or not. If you're not too sure then have conversations with him in order for you to receive clarity.
Ladies, we have to be real honest with ourselves and face the reality of certain situations to avoid being stuck in situations we really don't need to be in. If a guy wants to be with you he will clearly show you he wants to be with you. If a guy wants a baby with you he will clearly show you he wants a baby with you. Don't ignore the signs, the signs are there for a reason !
Instagram : https://www.instagram.com/tricksofaplayer_/
Tricks Of A Player Ebook Available In Lulu Store:
http://www.lulu.com/shop/jasmine-remi-ilori/tricks-of-a-player-modern-womans-guide/ebook/product-23804981.html
Tricks Of a Player Ebook available In Nigeria On Okada Books:
https://okadabooks.com/book/about/tricks_of_a_player/24174