Dear Players, Don't let karma bite you through your daughters ! 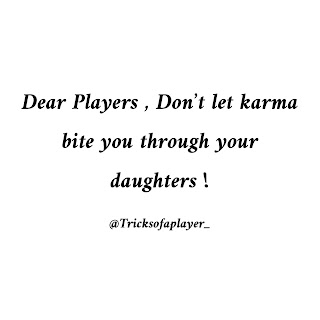 Players are going to play and karma is going to have its way ! This is just the way life goes. But honestly you cannot go around breaking hearts and just expect karma to not catch up with you. If karma just about misses you it may just bite you through your daughter. Imagine your daughter coming home crying or almost going into depression because of a player who broke her heart without a care in the world. Your daughter who is most probably someone you will kill for is now being broken by a person that you used to be.
If players thought that what they were doing would effect their children, i'm sure they may think twice before breaking someones heart. But the issue is they just don't think or care about the consequences in that moment. All a player cares about in that moment of time is satisfying their own needs regardless of the heart that is being broken as a result of it.
To be quite honest i don't quite mind the idea of karma biting a player through their daughter as I believe that all is fair in love, war and karma. The truth of the matter is if players stop playing without remorse then karma wouldn't have to look for their daughters and thats on period !
It's not just players though, everybody in this life should be careful of how they treat people because karma has no menu, you get served what you deserved. So tread carefully with peoples hearts, and treat them exactly how you'd want your children's heart to be treated. Life is soo simple but its us humans who make it complicated.