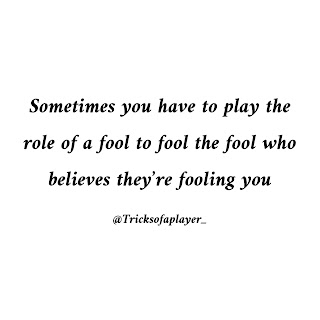 Now, When I say play the role of the fool I don't mean act foolish, I mean sometimes pretend you don't know what's happening. If you pretend as though you're oblivious to what is happening even though you are fully aware of what is going on and hardly react to their foolishness, you will most likely confuse the player.

The thing is, when you react to a players foolishness, you're making them aware that you know what's up which only makes them think of other ways to play you where they may not get caught and in one way it just intensifies the level in which they play you at. However, if you let things slide and ignore some of the signs you will be the one to have leverage over the player and you'll be able to outsmart the player and catch the player at their own game.

To understand and outsmart the fool is to become the fool and it is just that simple. Smile and wave guys and let the ball be in your court. Once the ball is in your court, you have all the power to play the player at their own game !